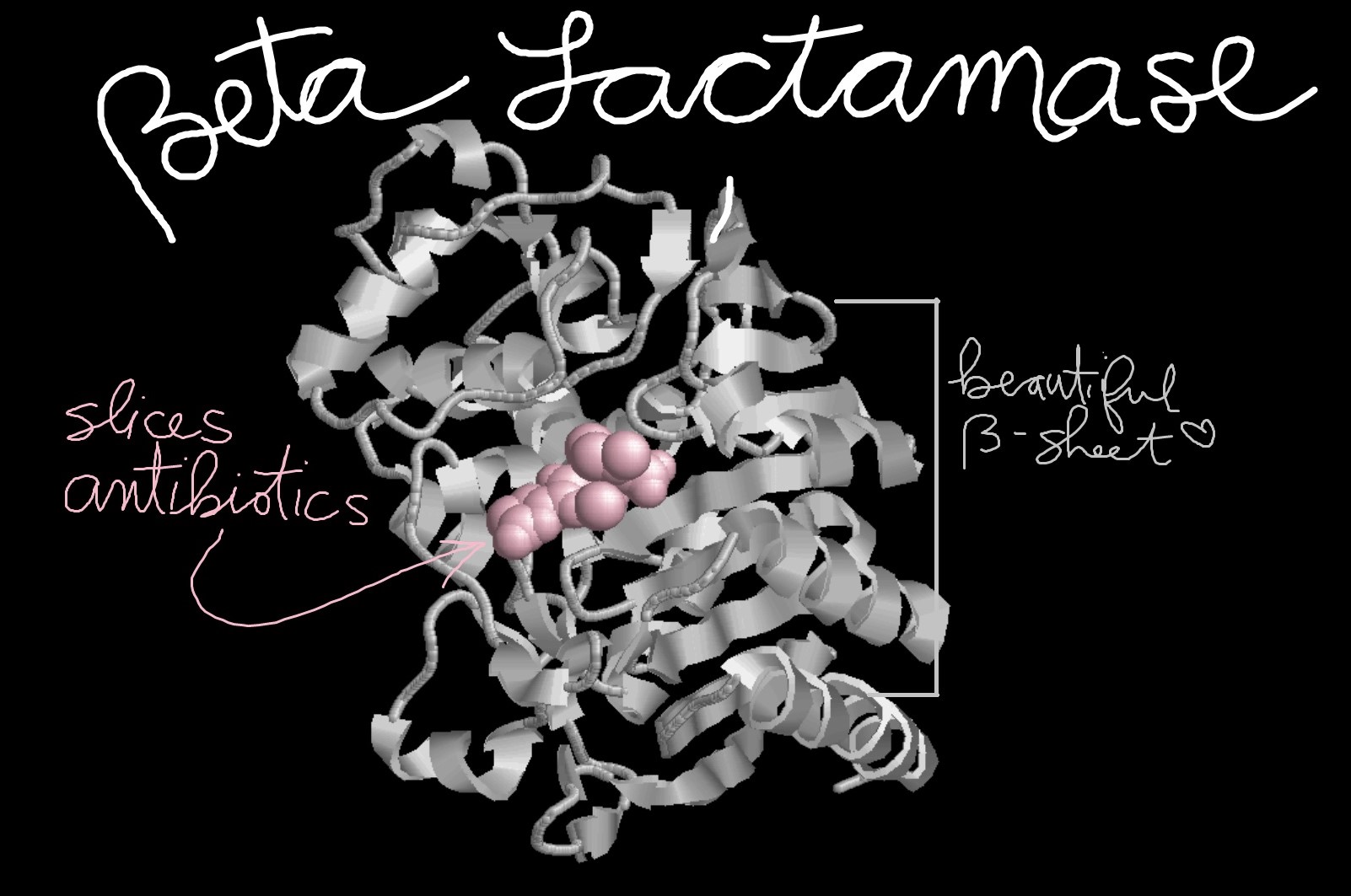 Have you ever been sick with strep-throat? Pneumonia? Food poisoning? A UTI?

You visit your doctor and she says your illness is a bacterial infection, so she is prescribing you some antibiotics.

She instructs you to take your entire round of antibiotics, all the way to the last dose, even if you start feeling better.

A few days later, you are feeling healthy and happy again. You still have another week’s worth of pills… do you take them like your doctor told you to? I sure hope that you do, because the failure to kill all of the disease-causing bacteria in your body actually encourages the survivors to begin a stronger, tougher generation. The prevalence of today’s protein, beta-lactamase, is one result of not following your doctor’s instructions!

Beta-lactamase allows certain bacteria to resist antibiotics like penicillin. You could call it an anti-antibiotic!

Penicillin is just one member of a the beta-lactam family of antibiotics. All members of this family include a part that looks like this:

Beta-lactamase fights antibiotics with a sword. That is, it slices the beta-lactam open. An antibiotic with the wrong structure can no longer do its job, and the bacteria wins.

You might assume that proteins like beta-lactamase evolved in response to antibiotic drugs. That’s what I assumed!

But beta-lactamase is actually a lot older than antibiotic drugs. Scientists predict that the first beta-lactamase arrived on the scene billions of years ago.* Penicillin? It’s less than 100 years old.

So if beta-lactamase is ancient, how do our antibiotics impact it? Antibiotics may decrease the total number of bacteria, but they selectively kill bacteria without beta-lactamase or other resistance properties. Resistant bacteria are the survivors, so they get to pass on their resistance to the next generation. Now, there is more resistance in the population than before.

Beta-lactamase is just one way that bacteria can fight back. There are several other ways, and it is likely that more evolve all the time. Bacteria constantly evolve to fight back and survive, so many of our antibiotics will eventually be rendered ineffective. This is why scientists and doctors are always on the lookout for new strategies to take down bacteria! We can do our part to resist antibiotic resistance by using our antibiotics properly.